The Haw Pha Bang (Ho Pha Bang), Royal or Palace Chapel, is located at the northeastern corner of the grounds of the Royal Palace Museum. Although it is a new structure, it is built in the traditional style and is tied directly to the history and traditions of this World Heritage City. The Haw Pha Bang has been designed as the permanent home/shrine for the Pha (or Pra) Bang, Luang Prabang's namesake and most sacred image. The image, brought to Luang Prabang in 1359, earlier had places of honor in various city wats (including Wisunalat and Mai). Most recently it has been on display in the Royal Palace Museum from which location it is carried to Wat Mai for ritual cleansing during the city's New Year's celebration.

Work on this permanent resting place for the Pha Bang began in 1963 during the reign of Sisavang Vatthana (1959-1975). Originally to be funded by small contributions from all over the country, construction of the shrine was interrupted by invasions, wars, revolution and the end of the monarchy. The accession of the communist Lao People's Revolutionary Party, popularly known as the Pathet Lao, to power in 1975 led to attacks on Buddhism and the monarchy; it also led to the denigration of the Pha Bang that was identified with the royalist tradition. But government policies and practices changed dramatically, at least toward Theravada Buddhism and Lao folk religion. Currently state officials take part in the New Year's and other celebrations that embody the historic Lao religious traditions.

This change of policy also included the construction, or reconstruction, of the Haw Pha Bang, which began in earnest again in 1993. The Haw Pha Bang is built in the traditional Luang Prabang style, but using modern construction techniques and materials, and is set on an exaggerated platform, befitting its special role as repository of the paladin of the city. It is highly ornate with gold and glass decoration covering much of its exterior and interior surfaces. A number of naga-flanked stairways and an elaborate multi-faceted roof structure add to its over-all impact. It is assumed that Luang Prabang's namesake and most sacred image will take its place in the position of honor in the pavilion in the very near future. As of this writing (July, 2005), the structure is virtually complete.

Perhaps a few comments about the sacred Pra Bang would be in order. It is 83 cm, almost 33 inches, tall and is 90% gold with additional silver and bronze alloys. It weighs around 50 kg., or 110 lb. The statue, with both hands raised in the attitude of Abhayamudra (dispelling fear and offering protection to those who would give it honor) served as a unifying force for religious and royal traditions. Although it appears to be of 14th century Khmer origin, legend dates it from Sri Lanka in the first century AD. In 1359 the Khmer king gave the Pra Bang to his son-in-law, the first Lang Xang monarch Fa Ngum (1353-1373); it was to provide Buddhist legitimacy both to Fa Ngum's rule and theoretically to the sovereignty of Laos. In 1563 King Sai Setthathirat (1548-1571) brought the Pra Bang with him to his new capital at Vientiane. On several occasions (c. 1778 and c. 1827) Siamese invaders took it back to their lands, but Rama IV, King Mongkut, finally returned it in 1867. It was placed first in Wat Wisunalat; then the French moved it to Wat Mai for safekeeping in 1984. After a rather complicated series of changes it was placed in the Royal Palace Museum in 1947. There remains doubt whether the image in the museum is the same object that was given to Fa Ngum. Some suggest that it is a copy and that the original is in a vault either in Vientiane or perhaps even in Moscow. Nonetheless the Pra Bang remains an object of veneration and a reminder of the rich traditions of Luang Prabang. 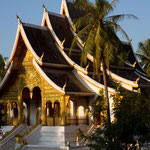 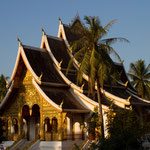 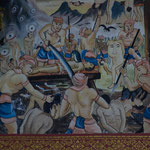